Love as the Practice of Attention (love – part 3)

Home/Love as the Practice of Attention (love – part 3)

This week I had to re-up my CPR certification. I was late to the class and sat down in the only available seat, quickly realizing I was next to the “strange” guy. It’d been the empty seat for a reason. Embarrassingly my first reactions were judgement and envy. I was judging the man for being loud and missing the social cues of the moment. I was judging myself for being late. And I was looking around the room envious of all the partners I could’ve had if I’d been on time. I watched all these reactions with curiosity and then my self-judgement took a darker turn. I started to feel like a fraud. I thought about the sermon I’d prepared for you this week. A sermon about Jesus touching a leprous man. And for the next three hours I did my best to be kind to my partner. I could’ve been better. But had I not been so actively thinking about love lately, I definitely would’ve been worse.

And this is the thing. We humans are flawed creatures. We love imperfectly even when we’re trying. Which means… We better keep trying! 😉

So scroll down a bit to hear this week’s sermon (and just fyi, we had to film the beginning twice because Cassidy and Stacy, my awesome film crew, starting gawking and then I started laughing when I shared something about myself from 20-years ago… I can’t wait to hear your reaction after you’ve watched!). 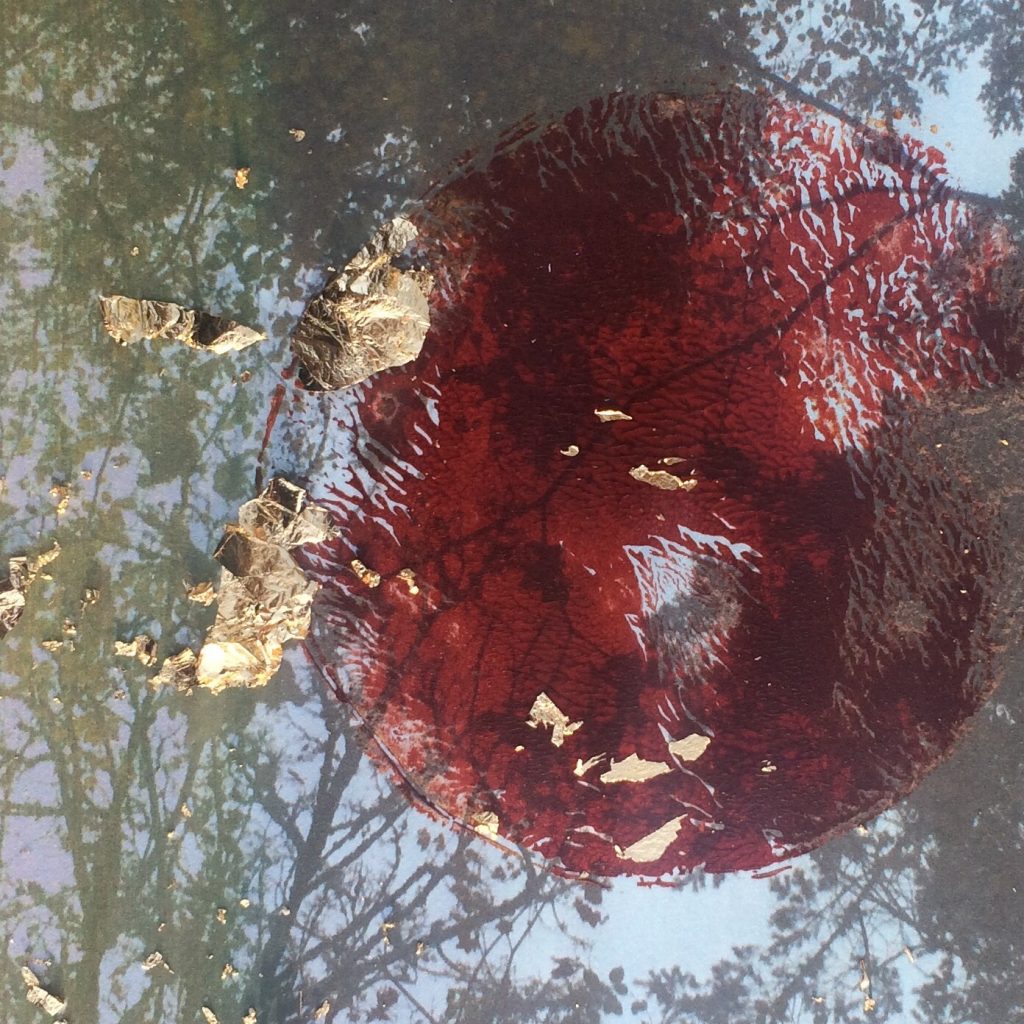 I made SO much art this week! Since the sermon explores the importance of human touch I kept thinking about the space between the hands of God and Adam on the Sistine Chapel’s ceiling. And then I started making pen drawings of interconnecting arrows in the style of Cy Twombly (a bit different from Michelangelo!). But in the end, I just wanted to make something beautiful. Something that represents the fact that we’re all connected, even when it doesn’t feel like it. Even when we don’t act like it…

Love as the Practice of Attention

Spiritual seeking never seems to take us on a linear path. It’s cyclical and spiraling, moving us up and down, back and forth. I’ve spent the last two decades of my life searching for spiritual truth. And let me tell you, the young woman who started that quest in her early twenties would never have guessed that she’d end up here. Preaching behind a pulpit she built in the backwoods of the property she lives on in almost the middle of nowhere. She wouldn’t believe all this because that young woman was a professional makeup artist with dreams of living and working in the fashion world of New York City. But here she is. Here I am.

Part of the winding path that brought me here was a 3-year pit stop in Richmond, IN, where in 2007, I went to seminary. Hanging in a classroom where I spent many, many hours is a quote by a Quaker man named Elton Trueblood. It reads: “Jesus Christ can be accepted; He can be rejected; He cannot reasonably be ignored.” True enough. I’ve never been able to ignore him. I went to seminary angry at Jesus. Angry at Christianity. Over 10-years, and much personal work later, I now view most of what gets called Christianity in my country as a political sham. But I’m no longer angry at Jesus. As you’ve heard in my past sermons, I consider him a essential teacher.

Over the past few weeks, we’ve been exploring the idea of love. Loving those we don’t feel love toward and love in relationship to sacrifice. All this pondering about love reminded me of a sermon I wrote as a seminary student, a sermon about attention, inclusion, and touch—all acts of love. I decided to revisit this old sermon and share a portion of it with you this week.

There are two stories in the Gospel of Mark that I have always loved. Two stories that have kept my connection to the character of Jesus alive no matter what’s happening to the culture of Christianity around me. These stories of Jesus’ actions inspire me to do the hard work of learning how to love better.

Let me read them to you:

From chapter one: A leper came to him begging him, and kneeling he said to him, “If you choose, you can make me clean.” Moved with pity, Jesus stretched out his hand and touched him, and said to him, “I do choose.  Be made clean!” Immediately the leprosy left him, and he was made clean. (Mark 1:40-42)

And from chapter five: Now there was a woman who had been suffering from hemorrhages for twelve years. She had endured much under many physicians, and had spent all that she had; and she was no better, but rather grew worse. She had heard about Jesus, and came up behind him in the crowd and touched his cloak, for she said, “If I but touch his clothes, I will be made well.” Immediately her hemorrhage stopped; and she felt in her body that she was healed of her disease. Immediately aware that power had gone forth from him, Jesus turned about in the crowd and said, “Who touched my clothes?” And his disciples said to him, “You see the crowd pressing in on you; how can you say, “Who touched me?” He looked all around to see who had done it. But the woman, knowing what had happened to her, came in fear and trembling, fell down before him, and told him the whole truth. He said to her, “Daughter, your faith has made you well; go in peace, and be healed of your disease.”  (Mark 5:25-34)

Both of these people had been suffering for a long time. Because of their ailments, leprosy and bleeding, they were considered unclean and were not allowed to participate in community life. For years, they had been forced into painful isolation, but the gift of touch healed them.

Years ago, I had the opportunity to work among the people often considered unclean today, the people shoved into the alleys and forced out of sight. The mentally ill and homeless. For two years, I worked among women in Spokane, WA and for the only time in my life, I was on a first name basis with a lot of the people begging for money on the street corners and talking to themselves as they wandered aimlessly through downtown. The people often considered too dirty or frightening or weird to pay attention to. Inside the center where I worked, however, these women were acknowledged and known by name. They were allowed their full humanity and freed from their isolation. The simple gestures of reaching, of looking, of listening, of touching—just as for the leprous man and the bleeding woman—worked miracles. For two years I witnessed countless miracles in the lives of these women, all brought about through relationship.

I don’t know how many times I’ve read the story of the leprous man in chapter one, too many to count. But the power of this story, the power of Jesus’ first response, that of reaching and touching, has never weakened for me. This leprous man, most likely yelling “unclean, unclean” as he approached Jesus, was touched, probably for the first time in years. I can’t imagine the isolation that would come with permanent separation from human contact. It’s clear that Jesus understood it though.

The story of the bleeding woman is similar, but not identical. She tried to stay hidden, she didn’t ask for Jesus’ attention, she attempted to gain the healing touch without forcing him to notice her. But it didn’t work. The healing comes from the attention, in the act of being noticed and included as a full member of society. Jesus stopped and wouldn’t continue any further until she was given this attention. He wanted to look at her, to hear her story, and to voice his offer of peace to her. He didn’t want her to remain on the outside of society any longer.

These gracious acts of attention, inclusion, and touch do not require divinity. No matter what we think about the divinity of Jesus, I hope we can pay attention to his humanity. And that through his example of reaching out we can be challenged to fully embrace our own humanity and the humanity of everyone around us. These stories offer us an opportunity to look deeply into our own lives and figure out who we have stuck in the “unclean” category. Who are the people we deem unworthy of our attention, inclusion, or touch? This could include the homeless we pass on the street. It could include people suffering from illness or injury. But it could also include people we just don’t like or find annoying. People we just don’t want to include.

Of course, whenever we categorize someone as unclean or unlikable we’re operating from the mindset of separateness. We’re focused on the desires and attachments of our small “s” self rather than seeing ourselves in all creatures and all creatures in ourselves. As always, there’s an opportunity for practice here… Remember the sanskrit phrase I shared last week: Pratipaksa Bhavanam, which means cultivating the opposite. Spiritual practice can be defined in many ways, but one of the most important ways it’s enacted is through the practice of paying attention. Can we pay attention and notice when we find ourselves thinking of someone as “unclean” or unlikable. Can we refrain from judging our feelings and instead be grateful that we noticed them? Can we be grateful for the opportunity that our noticing provides for us to practice cultivating the opposite? Instead of seeing the person in front of us as separate from us, can we look deeper and find a bit of the humanity we share with them. Can we follow the example of Jesus—and even in super small ways—work to offer dignity rather than exclusion.

We all benefit from the wisdom of spiritual community. And community means more than one voice, so please add yours to the conversation.

Do the Yoga Church Sunday Sermons bring you joy and value? Please consider becoming a regular supporter of this ministry. It’s a totally free and ad-free offering. But that doesn’t mean it’s without cost. It takes many, many hours a month to write and produce, plus thousands of dollars to sustain.

Click here to make a contribution. Your support matters. Thank you.

Join us on Sundays for the Yoga Church Gathering. These online gatherings are designed to help you deepen into the teachings of the Sunday Sermons. They’re designed to nourish you through all levels of your being and give you the tools you need to spiritually resource yourself.

Help spread the love around! Share the sermons with your community:

Page load link
PRACTICE WITH US

You’re invited to join us on Sundays for the Yoga Church Gathering. These (free) online gatherings are designed to help you deepen into the teachings of the Sunday Sermons. They’re designed to nourish you through all levels of your being and give you the tools you need to spiritually resource yourself. Once you’re signed up, we’ll send you the zoom link. We look forward to meeting you!