the Ground of all Being (fall equinox part 1)

And similarly, as I worked at my art table this week, several things kept happening, but nothing as I’d planned it. I offer you this collage made of prints and photos. Trees I made from “stamping” a painting from one piece of paper onto another. I made two of them and flipped one upside down, so you can’t really tell the difference between roots and branches. The other images are photographs I took while wondering my back woods, looking up and down, noticing the signs that fall is here! All together they give me a sense that there’s no correct direction to look, but that every direction is going to teach me something different. 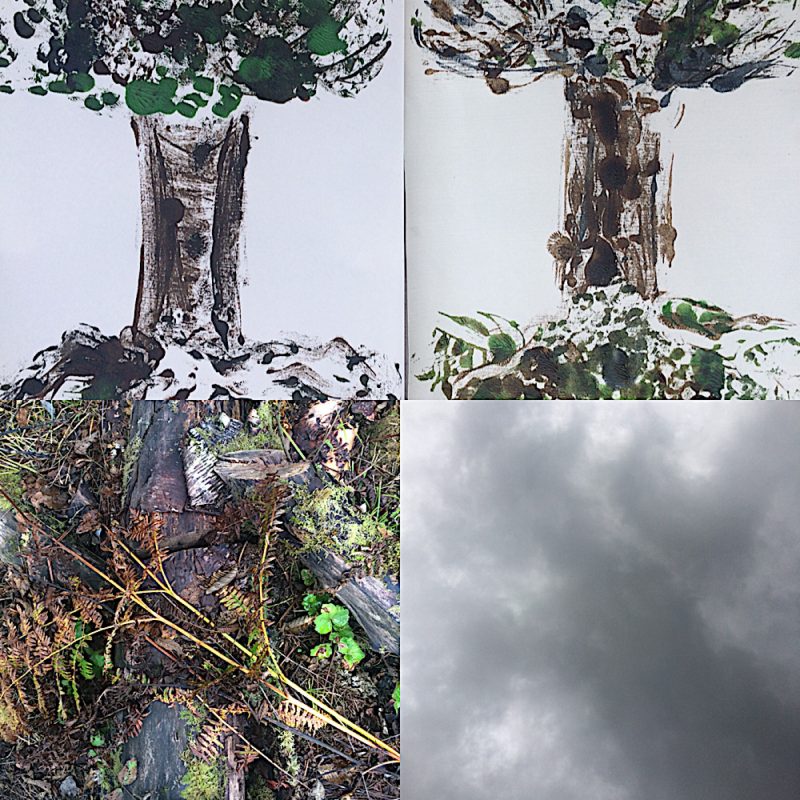 The Ground of all Being (fall equinox part 1)

Do the Yoga Church Sunday Sermons bring you joy and value? Please consider becoming a regular supporter of this ministry. It’s a totally free and ad-free offering. But that doesn’t mean it’s without cost. It takes many, many hours a month to write and produce, and thousands of dollars to sustain.

Click here to make a contribution. Your support really matters.

I love ancient scripture. I read scripture as the striving of humanity to understand itself and to imagine and grasp after something larger than itself. When I read scripture I see the poetry and prose of people, not that different from me. People trying to understand the mystery and purpose of existence. Who are we? Why are we here? Where are we going? And what are we supposed to do?

An underlying theme in all the scriptures I’ve read is an understanding that death will come to us all. Which begs the question: “Does anything exist beyond death?” And because of this question scriptures are filled with the stories of heroes. Heroes searching for—and often finding—a path that will lead us through death, back to life.

Yet we know that despite the searching of these heroes and the answers they’ve brought back to us… that death still comes. These beautiful bodies that allow us to experience Being, will age and die. So what is the life that our heroes promise us? What is the truth they are trying to reveal?

Different traditions call this aspect of us that exists beyond death by different names. A few of the words that have meant something to me are soul, purusha, and capitol “S” Self.

In the Bhagavad Gita, Krishna tells Arjuna: “The Self cannot be pierced by weapons or burned by fire; water cannot wet it, nor can the wind dry it. The Self cannot be pierced or burned, made wet or dry. It is everlasting and infinite, standing on the motionless foundations of eternity. The Self is unmanifested, beyond all change. Knowing this, you should not grieve.”

Jesus, speaking with a Samaritan woman by a well, said: “Everyone who drinks of this water will be thirsty again, but those who drink of the water that I will give them will never be thirsty. The water that I will give will become in them a spring of water gushing up to eternal life.” Later he said that: “Out of the believer’s heart shall flow rivers of living water.”

So how do we know this Self that cannot be burned or pierced? How do we drink the water that leaves us never thirsting for more? Trying to answer these questions, the hero of the Katha Upanishad, a teenager named Nachiketa goes to study with the King of Death and is taught the practice of meditation. The text ends with the King of Death telling Nachiketa that… “The Lord of Love, not larger than the thumb, is ever enshrined in the hearts of all. Draw him clear out of the physical sheath as one draws the stalk from the munja grass. Know thyself to be pure and immortal! Know thyself to be pure and immortal!”

Krishna tells Arjuna the Self cannot be killed in battle. Jesus tells the Samaritan woman of something that quenches a thirst beyond the physical. The King of Death tells Nachiketa to draw the Lord clear out of the physical sheath. These are powerful stories that point us toward the eternal. They point us toward something beyond the ever changing reality that is our life. These stories are worthy of our meditation. They can help us find freedom from our small “s” self-concerns—help us see something beyond the anxious habits of our minds, beyond the constant call of the ego for self-preservation.

But they can also disconnect us from our bodies and our world. Our world, so deeply effected by war and poverty where bodies are being pierced and burned. And people don’t have water to quench their physical thirst.

Paul Tillich—a German military chaplain in WWI—had his faith undone as he spent more time digging graves than sharing the sacraments. He wrote: “I have constantly the most immediate and very strong feeling that I am no longer alive. I am experiencing the actual death of this our time.”

After the war, he felt like God had died on that battlefield and he searched for his bearings. He ended up becoming one of the most influential theologians of the 20th century. I bring him up because he is the person who proclaimed that God is the “Ground of all Being,” an idea that has shaped my understanding of everything and won’t allow me to separate the spiritual from the material.

When Jesus told the Samaritan woman of something that quenches a thirst beyond the physical, he wasn’t telling her to stop drinking water. In fact, the conversation began because Jesus himself had asked for a drink. He was tired from walking. And it was noon, in the desert. Jesus needed to quench his physical thirst. Without water we couldn’t have life. Jesus understood this, hence his practical metaphor of living water.

And Arjuna, after hearing about the everlasting and infinite “Self” asked Krishna a deeply practical question. He asked: “Tell me of those who live established in wisdom, ever aware of the Self, O Krishna. How do they talk? How do they sit? How do they move about?” Krishna answered him by saying: “They live in wisdom who see themselves in all and all in them, who have renounced every selfish desire and sense craving tormenting the heart. Neither agitated by grief nor hankering after pleasure, they live free from lust and fear and anger. Established in meditation, they are truly wise. Fettered no more by selfish attachments, they are neither elated by good fortune nor depressed by bad. Such are the seers.”

Krishna and Arjuna’s conversation is not about escaping death, but about living. Arjuna asks how people rooted in the capitol “S” Self talk and sit and move and Krishna responds that they see themselves in all and all in them. In other words, they live in relationship and union with the world. They see the connection between the Self in them and the Self in their neighbor.

Krishna and Jesus are always asking us to become something new. They understood that our bodies will die, but they also understood that within our life lives the potential for a transformative freedom from the fear of death. So the question is not “Does anything exist beyond death?” but “How do I live knowing I will die?” How do I live?

Diana Butler Bass, also influenced by Paul Tillich, wrote: “God is the ground, the grounding, that which grounds us. We experience this when we understand that soil is holy, water gives life, the sky opens the imagination, our roots matter, home is a divine place, and our lives are linked with our neighbors’ and with those around the globe. This world, not heaven, is the sacred stage of our times.”

God is the ground of all Being. The ground of your Being and mine. The ground of this earth that we share. So let us put our hands in the dirt and be inspired by the expanse of the sky. Let us drink the living water. Let us care about the bodies being burned and pierced. Let us wake up everyday and ask ourselves: How do I live?