Which is why I’m excited to share this week’s sermon with you. It tells the story of an epic, night long fight.

It’s a story that changed my life. I hope it will change yours too.

It’s a story I’ve been reading for about 12-years now and it’s deeply informed my understanding of the spiritual quest. It’s permeated my heart and it shows up underneath, within, and around everything I write. 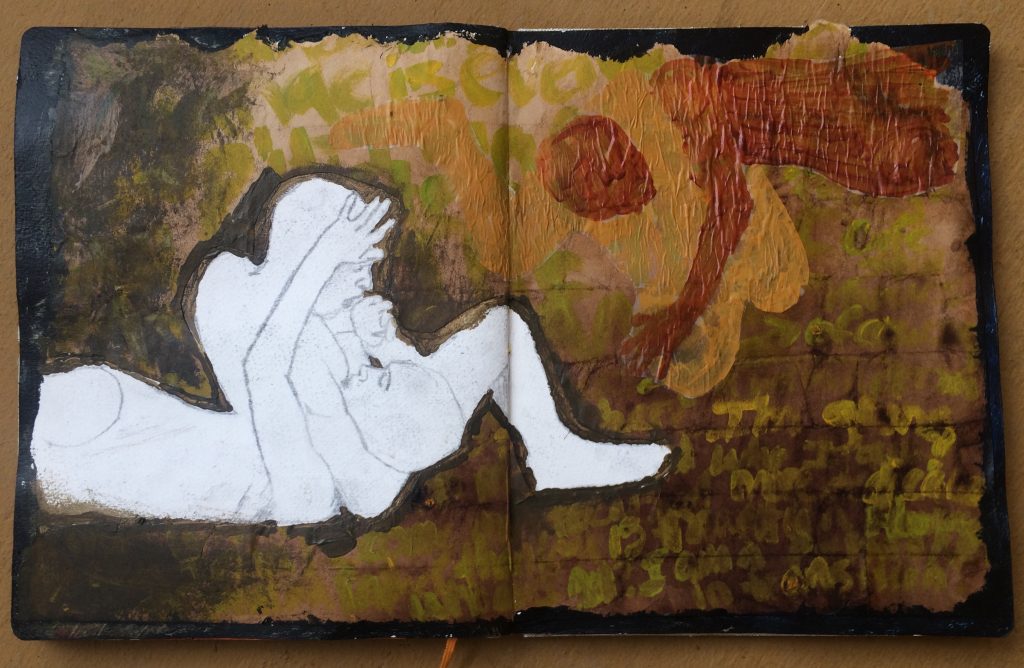 As promised, today I’m going to tell you a story. It’s not my story. It’s a very old, telenovela worthy family drama. It’s found in the book of Genesis (Gen 32.24-31). And it’s one of my favorite stories of spiritual search. How many times have you heard me say “you’ve got to wrestle with mystery?” Well, this is the story that inscribed this idea on my heart.

The protagonist of the the story is Jacob. And the basic plot is this: Jacob was leaving his father-in-law’s household to be reunited with his brother Esau, who he hadn’t seen in 20-years. It’s important to know that things had ended badly between them back then. Jacob had made some really poor choices. So he was scared of this reunion. And the night before it was supposed to happen, he sent everyone away and sequestered himself in solitude. But, and I think we can all appreciate this, it’s hard to sleep when you’re terrified of the next day. So he didn’t sleep. He fought with mystery.

The story tells us that once Jacob was alone, he was confronted by an unidentified man, who he fought with until daybreak. At one point, the mystery man started fighting a little dirty and struck Jacob on the hip, causing it to go out of joint. But apparently the injury wasn’t enough to free him, because at dawn the mystery man had to ask to be released. Jacob, clearly in control at this point, refused to let go unless the man blessed him. Instead the man asked for Jacob’s name. When Jacob told him his name, the mystery man pronounced that Jacob’s name would now be Israel because he had wrestled with God and humans, and had prevailed.

Which leaves me saying: What? Who was this mystery man? Jacob begs for his identity, but he doesn’t get it. Instead he gets a sarcastic response. The man basically says: “Why would you ask me that?” He did concede something to Jacob though. He gave him his blessing. And that’s the last we hear of him. The mystery man isn’t mentioned again. He’s just gone.

The story tells us that Jacob, who I assume was alone at this point, decided for himself who the man was. He decided to rename the place where he’d been fighting all night—a place of great meaning to him at this point—because in his understanding he had seen God face-to-face and had lived. And then, the sun rose and he limped away—off to meet his brother.

And that’s the story.

Of course it’s found in a larger context. There’s heaps of family drama that can be read before and after this night of wrestling. And when I read it in context I see the story of Jacob’s night of fighting as a fearful man wrestling with the demons of his past behavior.

But when I read it all by itself, I see an allegory of spiritual searching. It reminds me of the Bhagavad Gita, which is also a story pulled from a much larger story. One that tells the tale of a young man named Arjuna who’s scared the night before a great battle. Like Jacob’s story, it too tells of family drama and fighting. But for thousands of years, it’s been read as a beloved allegory of the inner battle that rages within us all when we try to understand life’s biggest mysteries.

How many sleepless nights have we all spent wrestling with questions about life and death, identity and blessing? Just like Jacob and Arjuna, who in moments of solitude ended up in a holy war of questions, we’ll all have to wrestle with big, scary questions throughout our life.

Last week I said I have faith in the power of good stories. I love this story of Jacob wrestling with an unidentified man because it tells me a few things that feel true deep in my bones.

Human beings will always want to name the unnamable. All of human striving toward anything of meaning is an effort to follow Jacob in his asking the man for his name. Whether we’re talking about science or art or religion, we want to know the unknowable name. We human beings are constantly trying to hold mystery captive, to lock it down, define it, and force blessings out of it. But we can’t. And the harder we try the more injury we cause, for ourselves and for the world. How much damage has been done—and is still being done—by people who think they have the correct name of God?

This story tells us we shouldn’t be asking for the mystery man’s name. We should be exploring our own name. When the man asks Jacob for his name I hear mystery responding by telling us all, “if you humans want to understand life’s biggest questions, you should start by examining yourselves. Who are you? What is your essential identity?”

Of course, as we examine ourselves in light of the biggest questions, we won’t remain the same. We’ll change. Our identity and our understanding of everything will change. The mystery man in our story understood this reality and changed Jacob’s name. He makes the bold claim that Jacob has striven with God and humans and has survived. Therefore, he is no longer Jacob. He is something new.

This story is somewhat overwhelming. It tells of the biggest inner battle we can face. And yet it ends in utter practicality. The sun rises. The night is over. And Jacob walks away. He’s limping, yes, but he’s walking away. He’s walking toward his brother, toward his life.

Spiritual striving doesn’t remove us from life. When it’s effective, it roots us more deeply in our life. Last week I asked you to ponder the question: “What do you want to have faith in?” This week I add to the question by asking you to look around your life and to figure out where you’re stuck or lost or scared. What are the big, scary questions that you haven’t allowed yourself to wrestle with?

Just like Jacob, we’ll experience both injury and blessing in this life. We’ll all spend sleepless nights wrestling with mysteries we can’t solve. Throughout our lives our understanding of ourselves and the world will change. At different times in our lives we’ll name things differently. But every morning, when the sun comes up, we’ll have the opportunity to walk—or limp—toward what matters most to us.

Do you have a favorite story that inspires your sense of spirituality?

Do the Yoga Church Sunday Sermons bring you joy and value? Please consider becoming a regular supporter of this ministry. It’s a totally free and ad-free offering. But that doesn’t mean it’s without cost. It takes many, many hours a month to write and produce, plus thousands of dollars to sustain.

Click here to make a contribution. Your support matters. Thank you.

Join us on Sundays for the Yoga Church Gathering. These online gatherings are designed to help you deepen into the teachings of the Sunday Sermons. They’re designed to nourish you through all levels of your being and give you the tools you need to spiritually resource yourself.

Help spread the love around! Share the sermons with your community:

Page load link
PRACTICE WITH US

You’re invited to join us on Sundays for the Yoga Church Gathering. These (free) online gatherings are designed to help you deepen into the teachings of the Sunday Sermons. They’re designed to nourish you through all levels of your being and give you the tools you need to spiritually resource yourself. Once you’re signed up, we’ll send you the zoom link. We look forward to meeting you!